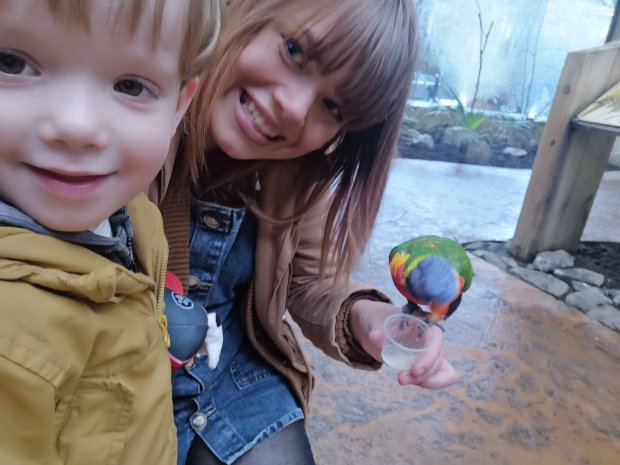 For the first time ever.. It wasn’t me who had to look embarrassed and sheepish, it wasn’t me who had to be THAT parent who apologisedLet me set the scene, on one of our ‘let’s go out and spoil our toddler to overcompensate for new baby’ days out to the safari Park, had a wonderful time going round the animals ignoring mostly all of them – as ACTUALLY Oscars packed lunch and the electric window were FAR more exciting.Then off we head to the rides, fortunately for my purse Oscar could only go on about 3 of them because of his height so we made our way round a few, on each of the rides was a girl the same size as Oscar who’s parents looked just as nervous as us at the whole ‘going on a ride alone’ thing. Toddlers are unpredictable and you do slightly panic that they will either scream the ride down or attempt an escape mission.So weve braved the cars, and the fire brigade ride and we head for the last one THE FLYING LIONS.I was particularly nervous about this one as it goes up in the air and the seatbelt was evidently pretty useless. I decided it was worth sacrificing a ticket to sit behind Oscar so that he ultimately didnt fall to his bloody death. As we began to board the flying lions, the little girl arrived, and i saw the moms same horror face- the ‘for fuck sake i need to pay for this ride now otherwise my toddler might be in the paper tomorrow for skydiving out and being flat as a pancake.’So, like the hero i am (if i do say so myself) i offered for the little girl to sit with my oscar and i would guard them from behind like a friggin’ soldier! Assuring her that i wouldnt let her small kamikaze child jump to her death. She agreed and was VERY thankful she didn’t have to pay an extra 2 quid. Both children get in, and the wonderful gentleman doing up the seatbelts went ‘right and i suppose you need to sit just here behind them’And this was when, little girls mom was ready for The ground to swallow her whole.. Because the wonderfully honest little girl said ‘YES SHE WILL CAUSE SHES TOO FAT’And with that, i decided to laugh and say ‘yes yes i am,’But if you wanna send me the discount codes for slimming world hit me up, because like the saying goes ‘if a man calls you ugly-hes being cruel,if a woman calls you ugly, shes just jealous,But if a child calls you ugly – you ugly’